To understand you can think of an image is a snapshot of a container. That means, an image is read only system where everything is packaged for running an application. where container is an instance of that image.

To create a container, we can execute docker run command. like

By this command we’ve created a new container from “hello-world” image. If you want to see all the running containers, run this command

There’s no container! But we just ran a container, what happened to that, right?

Hang on a moment. I’m here to explain. But before that run this command

Let’s run Apache tomcat in docker container. If you search in docker hub for tomcat. You’ll see that there are bunch of image under tomcat repository. A repository is a collection of images. Like tomcat:latest, tomcat:jdk11-corretto, tomcat:jdk11-openjdk-slim. Here tomcat is the repository and after each colon(:) it’s the tag name. For keeping commands clean for now, I’m just using the latest tag.

I told you earlier, docker container runs on totally isolated environment. You’re trying to access your host machine’s 8080 port. But tomcat is running on my-tomcat container. So, you cannot access that like this. But there is a way, it calls PORT binding. You can bind your host machine port with container port by publishing port from container. To publish port you can add --publish or just -p flag when running the container.

Now if you go to localhost:8080 you can see that tomcat is running.

Can we access in docker container? Of course we can. Let’s go to my-another-tomcat container’s bash and see what’s inside that container. To do that we’ve to run this

We’re now inside the container. Here you can see it’s totally isolated environment. It has it’s own pid/mnt/net/user etc. Type exit to come back to the host machine.

You can stop one or more container with docker stop command

So to stop my-another-tomcat container just run this command

If you type docker ps -a, you’ll that the container is there. But status is exited.

You can remove one or more container with docker rm command

So to remove my-another-tomcat container just run this command

If you type docker ps -a, you’ll not find the container. It’s been removed.

You can create an Image from a container. It can be useful to commit a container’s file changes or settings into a new image. This allows you to debug a container by running an interactive shell, or to export a working dataset to another server.

If we summarize the docker flow and try to visualize it, we’ll be ended up with something like this picture below 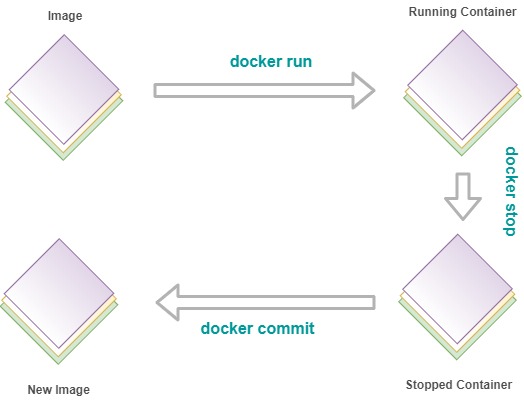 Docker for Java Developers | Running a simple Java App
How to install Oracle jdk8 on ubuntu 18.04